In a previous article we listened to a recording using the Spatial Mic Converter virtual mic output stage. In this article we will be listening to mid-side stereo recorded with Spatial Mic USB. You will then be able to easily compare many different stereo output formats and determine which works best for each project.

The audio for this demo is Dreamers’ Circus performing ‘Prelude to the Sun’ — a nordic folk remix of Bach’s Violin Partita No. 3 in E Major. This live concert recording was captured with a single Voyage Audio Spatial Mic USB at the Conrad Prebys Performing Arts Center in La Jolla California. Take a listen:

To experiment and listen to the recording in its un-mastered, raw state, first download either the Pro Tools (Studio or Ultimate is required) or Reaper DAW session below, along with Spatial Mic Converter plugin (AAX and VST3). The audio in these sessions is uncompressed 24-bit / 96 kHz, so may take some time to download.

As we discussed in a previous article, techniques for capturing live concerts can vary wildly depending on the genre of music, concert space, gear available and experience of the recording engineer. With limited microphones, there is a trade-off between direct sound from instruments and diffuse reverberant sound from the room. The distance at which the diffuse sound and direct sound are equivalent is sometimes referred to as the ‘critical distance’ or ‘diffuse field distance’. When recording an ensemble with Spatial Mic, it is important to understand how the mic will react at different distances from the performers and position the mic accordingly.

As you can hear, the mic was positioned by audio engineer Matt Birchmeier in such a way that the final outcome produced a pleasant balance between the direct sound from the performers and the diffuse field of the room in which it was captured. The location of Spatial Mic USB can be seen in the middle of the picture below, in front of Dreamer’s Circus and as you listen, see if you can hear the violin player move in the soundfield as the musician moves on stage. The musicians spacing on stage setup a nice balance and separation of the instruments which is reproduced accurately using the Mid-Side stereo output.

Spatial Mic can be connected to a laptop via a USB to Ethernet extender, which can allow for 200ft of separation. Using this method, the analog mic gain can be controlled remotely from the laptop using the Spatial Mic Control app, while 8 channels of audio is recorded directly into Reaper at 24-bit / 96kHz.

Once you’ve downloaded the session above, you can experiment with decoding the recording to different formats. Go ahead and open the session. In this case we are looking at the Reaper session as shown below: 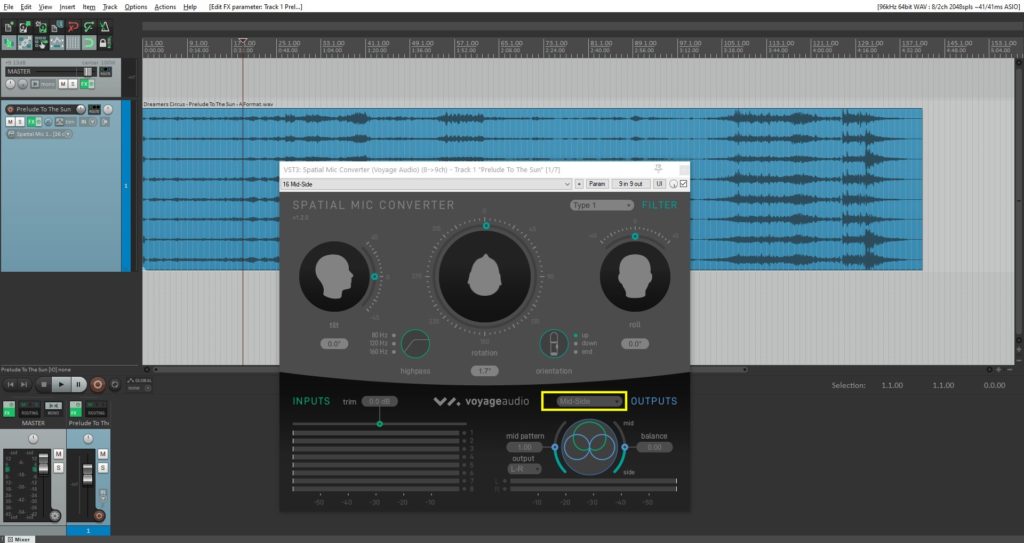 Be sure to select the Mid-Side output option from the drop down circled in the photo above so you can make changes and follow along with the rest of this article.

There are three settings we can adjust in the Mid-Side output stage of the plugin. The first is the mid pattern adjustment. The slider can be moved from narrow cardioid all the way to omni. Try changing this setting and listen to how the violin changes from a focused sound separated from the other instruments to a more open and blended sound.

The second setting we can adjust is the balance between the Mid and the Side patterns. Moving the slider up reduces the signal from the sides effectively narrowing the stereo field and reducing the ambience and room reflections of this recording. Moving the slider down reduces the signal from the mid pattern and increases the stereo width. In this recording, since the violin is front and center, the direct sound of the violin is overtaken by the indirect room reflections and the violin sounds thin and hollow and is overpowered by the piano and guitar.

The third setting is the output type. We can choose to output left-right stereo or the independent mid and side patterns. The stereo output is post matrix network and ready to use in your stereo mix session.

The above comments are all based on the plugin’s Rotation, Tilt and Roll settings being left at 0°. The great thing about Spatial Mic is the flexibility to adjust all of these while you mix. Be sure to play with all of these settings in conjunction with the Mid-Side settings to get creative and fun sounds. To learn more about the other virtual microphone output options see our previous case study, ‘Dreamers’ Circus Live Concert Recording With Spatial Mic’.

Finally, a big thanks to Dreamers’ Circus ( http://www.dreamerscircus.com) for letting us use this recording and to Matt Birchmeier (http://www.mattdbirchmeier.com) for making this happen.